An NBA champion, Olympic gold-medalist, as well as a college football and Super Bowl champion were among the stellar class of athletes inducted into the Florida Sports Hall of Fame Wednesday in Miami. This year’s eight-member class represents careers spanning from 1970 to current and across six different sports – swimming/diving, basketball, hockey, football, and baseball. They join the 271 Hall of Fame members inducted over the 60 years of the organization’s existence. 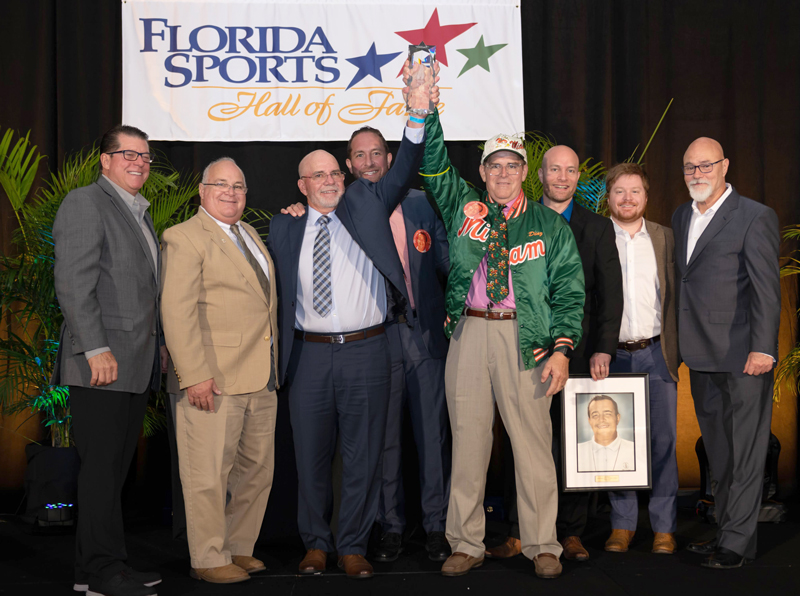 Leading off the evening was the posthumous induction of beloved University of Miami swimming and diving coach Bill Diaz. He is credited with adding a world-class diving program to the university which later produced Olympic Champion Greg Louganis. Under his leadership, 27 swimmers and divers earned All-America status at the University of Miami. 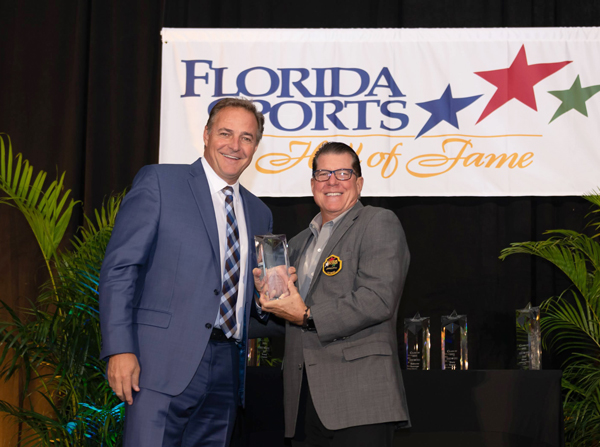 Diaz was followed by 19-year major league pitcher Al Leiter. Al spent three years with the Florida Marlins including the 1997 season, where he won 11 games and helped lead the Marlins to a World Championship. During his career, he won 10 or more games 10 times, played in three World Series and was named to two All-Star teams. 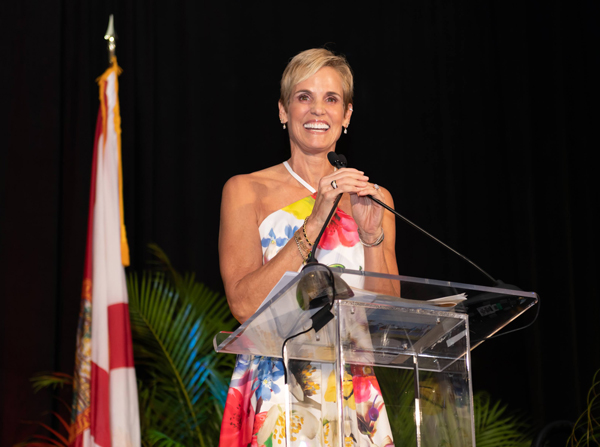 A graduate of the University of Florida, Dara Torres is one of the most successful Olympic swimmers in history. She was the first athlete to represent the United States in five Olympiads and won a total of 12 medals in Olympic competition.  She set the World Record in the 50-meter freestyle three times and was part of three relay teams that also established world records.  At the 2008 Olympics in Beijing, Dara shocked the world by winning a silver medal in the 50-free at age 41. 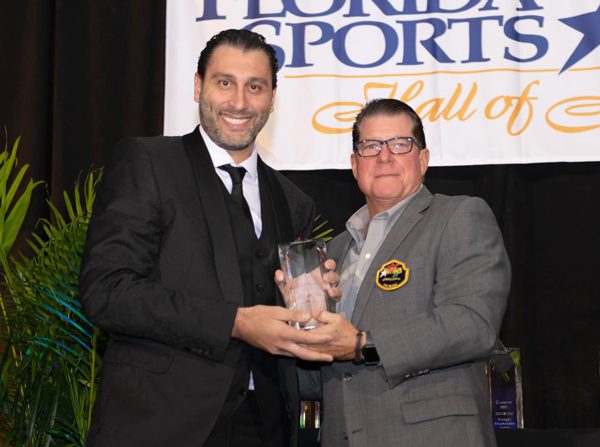 While his career is certainly worthy of NHL Hockey Hall of Fame consideration, Roberto Luongo’s two stints with the Florida Panthers more than qualified him for inclusion in the Florida Sports Hall of Fame.  During his career, he earned second-team All-NHL honors twice and played in five All-Star Games.  In 1,044 games in the net, Luongo recorded a 489-392-91 record and had an impressive goals-against average of 2.52 for his career. 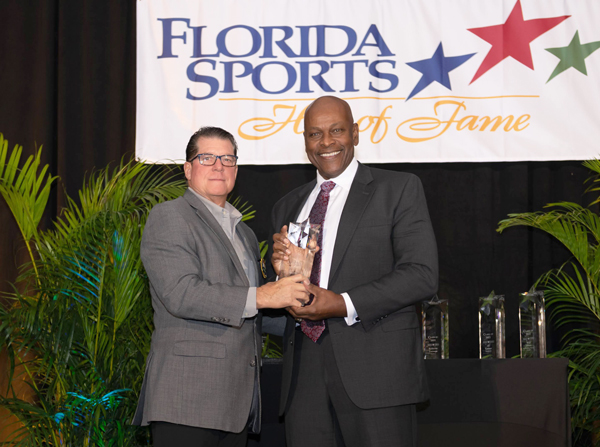 Dwight Stephenson played center for the Miami Dolphins from 1980 to 1987 where he established himself as one of the best in the league. A second round draft pick, he earned both All-Pro and All-AFC recognition. He also made five straight Pro Bowls (four as a starter). In his eight seasons, Stephenson played in all 16 games six times. He also won two AFC Championships and started in Super Bowl XVII and Super Bowl XIX.  As an inductee of the Pro Football Hall of Fame in 1998, Stephenson is one of just nine Dolphin players to have donned the Gold Jacket. 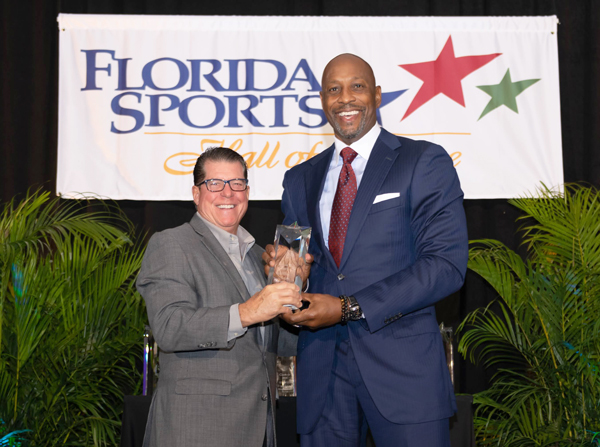 A center and power forward, Alonzo Mourning spent the majority of his National Basketball Association career with Miami, playing 11 seasons over two different stints for the Heat.  He averaged more than 17 points and 8.5 rebounds in his career, earning seven All-Star nods.  Nine times Alonzo helped the Heat to the post-season.  Mourning finished in the top 20 in the NBA in blocks 11 times and in rebounds five times. Alonso won NBA Defensive Player of the Year Awards twice and was the 2001-02 recipient of the J. Walter Kennedy Citizenship Award. 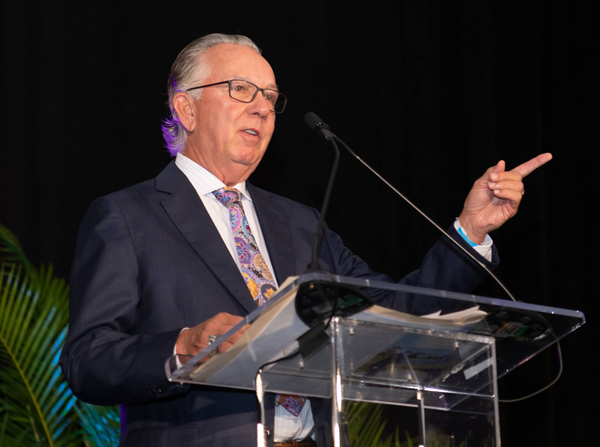 In his 25 years at the helm of the University of Miami Baseball, there wasn’t much Jim Morris didn’t accomplish. Morris won more than 1,000 games in his time with the Hurricanes. He was named the National Coach of the year in 1999 and 2001. He won two College World Series Championships (also in 1999 and 2001) and made it to Omaha 13 of his 25 years. At Miami, Morris’ teams made the postseason 23 times. Morris helped lead the charge on funding of Alex Rodriguez Park at the University of Miami. He ended his career with 1,590 wins and became only the 6th coach in Division I history to eclipse 1,500 wins. Morris was elected to the National College Baseball Hall of Fame in 2020. 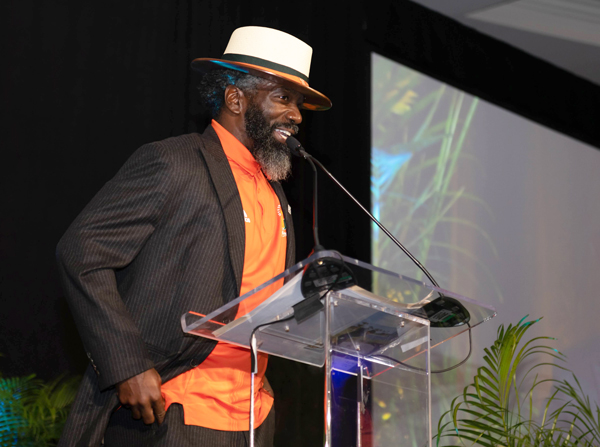 Ed Reed was a star at the University of Miami and parlayed an All-American career with the Hurricanes into a Hall of Fame career in the NFL. Reed earned nine Pro Bowl nods, was named to the NFL All-Pro Team eight times and led the NFL in interceptions three times.  Reed was the 2004 NFL Defensive Player of the Year and holds the distinction of being elected to both the College Football Hall of Fame and the Pro Football Hall of Fame and is also a member of the Baltimore Ravens Ring of Honor.

Each year, the Florida Sports Hall of Fame also selects an individual or organization that closely mirrors its mission of promoting physical fitness awareness, education, and the general health and welfare of children. This year, the Hewell Family Fame for Fitness award was awarded to S.Our 2021 and ninth recipient of the Hewell Family Fame for Fitness Award is Sydney’s Incredible Defeat of Ewing’s Sarcoma (S.I.D.E.S.).  The mission of S.I.D.E.S. is to provide financial assistance for children fighting cancer to ensure access to basic life necessities. S.I.D.E.S. also helps fund cancer research, college scholarships and provides children battling cancer with exciting and fun experiences. The foundation also advocates for and raises awareness of childhood cancer, and collaborates with other childhood cancer organizations throughout the country so that no child fights alone.

During the event, Florida Sports Hall of Fame president-elect Rick Hatcher announced that the 2022 event will be held in the Tampa/St. Petersburg area. For updates on that event and more, please visit www.flasportshof.org.

Celebrating its 60th year, The Florida Sports Hall of Fame was started by the Florida Sports Writers and Sportscasters Association to recognize and honor Florida’s greatest sports figures and events and leverage this collective celebrity to promote fitness awareness, education and sports activities among our state’s youth and adults. Equally important is the promotion of the qualities of discipline and honor among sports participants. The Florida Sports Hall of Fame attraction is housed in the MidFlorida Events Center in Port St. Lucie, FL.  Visitors can walk among and view more than 60 memorabilia exhibits from some of Florida’s most well-known sports stars, including legendary golfer Jack Nicklaus; Coach Bobby Bowden; National Hot Rod Association legend “Big Daddy” Don Garlits; golfer Andy Bean; tennis great Chris Evert; football legend Bob Griese, and many more. For more information, visit www.FlaSportsHOF.org.