Some of Florida’s most iconic athletes have been tapped for induction into the Florida Sports Hall of Fame as part of the 2022 Class. This year’s 12-member class represents careers spanning from 1979 to current and across seven different sports – baseball, bowling, fishing, football, golf and speed skating in addition to sports broadcasting. The class also represents the first-ever Special Olympic athlete to join the Hall. The 2022 induction ceremony will be held November 2 at Raymond James Stadium in Tampa, FL.

In making the announcement, Florida Sports Hall of Fame Chairman and President Rick Hatcher noted that the 12-member class is one of the most diverse — covering more than six sports and including four women, and is representative of some of the greatest contributors to sports in the state. “This class represents some of the most impressive accomplishments attainable: a Super Bowl MVP, a Stanley Cup Champion, an Olympic gold-medal coach, a World Series champion who is also a five-time All-Star, and a Guinness World Record holder,” Hatcher said. “We’re extremely excited to  announce this class and look forward to honoring them at our event in November.”

The Florida Sports Hall of Fame 2022 Class (in alphabetical order)

Rick was drafted by the St. Louis Cardinals in the second-round of the 1997 MLB draft. Two years later, as the #2 prospect in all of baseball Rick earned a promotion to the majors where he was the youngest player in the big leagues. The following year Rick was named the #1 prospect in all of baseball and garnered enough votes to place second in Rookie of the Year voting (2000).  He finished second in both the fewest hits allowed per nine innings and second in most strike outs per nine innings. In 2005, he switched positions and became an outfielder., one of only 12 players in MLB History to have debuted as a pitcher and then switched to be a position player. He played all three outfield positions and has suited up for the Cardinals, Royals, Braves, Nationals, Astros, and Mets.

In her 25-year outdoor career, Leiza Fitzgerald was instrumental in introducing women to the sport of fishing and the outdoors.  She created and implemented fishing events such as the Ed Alber Tarpon Rodeo, The World Sailfish Championships and The World Tarpon Championships. Her professional fishing team “Screamin Reels N High Heels”, competed in the Southern Kingfish Association, West Coast Division 11 and won first place in Perico Harbor and finished in the Top 10 teams, earning a spot in the SKA National Championships in 1998.  Her two-woman, redfish team was ranked one of the Top Ten “ALL STAR” Redfish Teams in the country out of a field of 200 teams.   In 2018, she was listed by Salt Strong as one of the top 12 lady anglers in Florida.  In 2020, she was named as one of the 30 most influential female anglers (Top 5 in Saltwater) in North America by Wildlife Enthusiast magazine. In 2020 she won Annual Top Angler for Redfish from the International Women’s Fishing Association and in 2021 she won IWFA Annual Top Angler for Redfish, Snook and Sheephead.

Nicknamed “Gonzo”,  Luis Gonzalez played 19 seasons for seven MLB teams. His best years were with the Arizona Diamondbacks and was one of the most popular players in the organization’s history. His game-winning hit in Game 7 of the 2001 World Series against New York Yankees closer Mariano Rivera clinched the Diamondbacks’ first and only World Series championship to date.

Gonzalez was a five-time All-Star and won a Silver Slugger Award in 2001. In addition to good power (354 career home runs), Gonzalez was known as an exceptional gap hitter. His 596 career doubles currently rank 19th on the all-time MLB list.

After retiring from baseball in 2008, Gonzalez joined the Diamondbacks’ front office in 2009 as a special assistant to the president. The following year, the team retired his uniform number #20, making him the first player so honored by the Diamondbacks.

Renee is known in the speed skating circles, both inline and ice, and her name held in the highest regard. As the founder and lead coach of inline speed team, Team Florida, her team and the skaters she’s produced are truly at home nowhere else like they are when they’re on the top of the podium.

For more than three decades, Renee Hildebrand has been training Ocala kids to become inline speed skating world champions. Three of her most accomplished former pupils on wheels have since transitioned to the ice, drawn by the challenge of mastering a new sport and the chance to chase Olympic glory: Brittany Bowe, seven-time world champion and two-time Olympian, Erin Jackson, 2022 Winter Olympic Golf Medalist in the 500 meters, and Joey Mantia, an Olympic medalist and 28-time world champion and world record holder.

Renee Hildebrand is a former Vice President of the Board of Directors for USA Roller Sports and former Head Coach of Team USA-Florida.

Jackson was drafted by the Tampa Bay Buccaneers in the fourth round of the the 1999 NFL Draft and went on to grab two interceptions to help Tampa beat the Oakland Raiders in Super Bowl XXXVII. He was named the game’s MVP, becoming the first safety to win the award since 1973 and the third defensive back overall. Jackson attended Florida State University and was named All-ACC as a junior. He finished his college football career with 194 tackles, 7 interceptions, 16 passes defensed, one forced fumble, one fumble recovery, and blocked four field goals.

James Jones played fullback for coach Charley Pell’s Florida Gators football team from 1979 to 1982. During Jones’ sophomore season in 1980, he was a member of the Gators team that posted the biggest one-year turnaround in the history of NCAA Division I football: from 0–10–1 in 1979 to an 8–4 bowl team in 1980.  He was a team captain in 1981 and 1982, a first-team All-Southeastern Conference (SEC) selection in 1981 and 1982. Jones finished his Gator career with 2,026 yards rushing, 593 yards receiving and 48 yards passing, and led the team in rushing yardage for three consecutive seasons from 1980 to 1982. He was later inducted into the University of Florida Athletic Hall of Fame as a “Gator Great” in 1998. In a 2006 article series published by The Gainesville Sun, the Sun sportswriters ranked him as the No. 45 all-time greatest Gator from the first century of the Florida Gators football team. 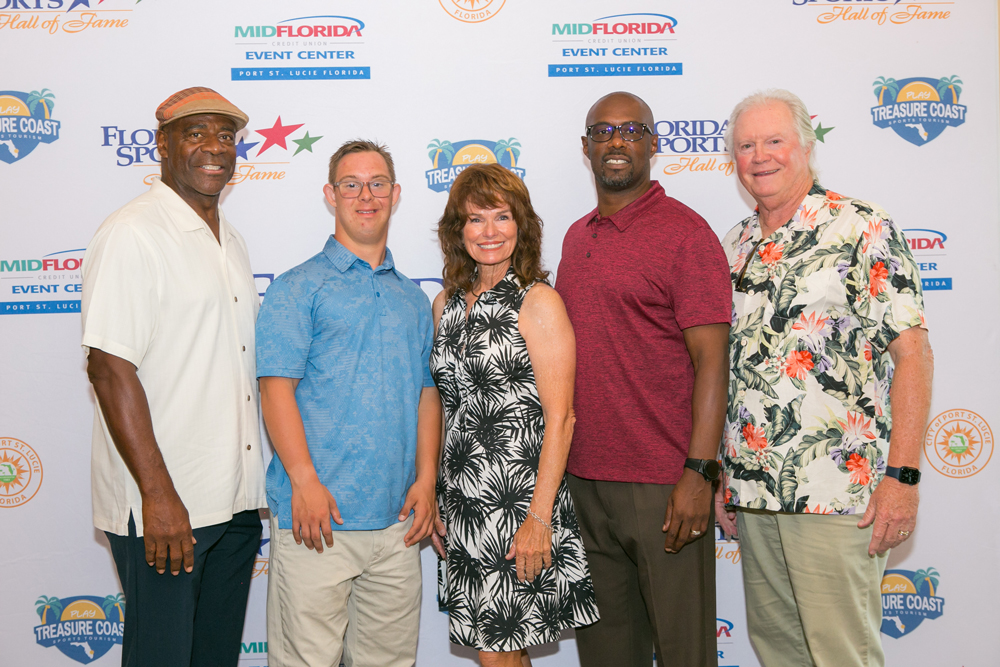 Lecavalier, who played 17 seasons in the NHL between 1998 and 2016, was the captain of the Tampa Bay Lightning for the 2000–2001 season and again from 2008–2013. He spent his first 14 NHL seasons with the Tampa Bay Lightning before being bought out following the 2012–13 season and signing with the Philadelphia Flyers for $22.5 million over five years. He was chosen first overall by the Lightning in the 1998 NHL Entry Draft and was a member of their 2004 Stanley Cup championship team. He won the Maurice “Rocket” Richard Trophy in 2007 as the NHL’s leading goal scorer. On February 10, 2018, the Tampa Bay Lightning retired his number 4 jersey.

Chris joined Special Olympics Florida when he was only nine –  starting with golf, then adding swimming, track and field, basketball and, after Special Olympics Florida introduced the sport in 2019, triathlon. In November 2020, Chris became the first person with Down syndrome to complete a full IRONMAN – that’s a 2.4-mile swim, a 112-mile bike ride, and a 26.2-mile run. The achievement made Chris a Guinness World Record holder. In the months after the IRONMAN, Chris won an ESPY and the Laureus Sporting Moment of the Year Award. He ran both the Boston and New York City marathons.

As a Special Olympics Ambassador, Chris strives to raise awareness and promote inclusion for the Special Olympics community and others with intellectual disabilities. His story, highlighted by ESPN, The New York Times and others, has inspired people around the world and shown them that individuals with intellectual disabilities will accomplish amazing things – if they are just given the chance.

Renowned as a trailblazer in the sports media landscape, Pam Oliver long ago established herself as one of the premier sports reporters on network television. She has contributed to Fox Sports’ coverage of eight Super Bowls, was the lead feature reporter on Fox NFL Sunday for many years, and served as co-anchor of FSN South’s “Southern Sports Report” from 2000 to 2003. Prior to joining the network, she was an ESPN reporter, gaining football experience covering the NFL Playoffs and NFC Championship Games. In addition to her duties as feature reporter on “NFL Prime Monday,” Oliver covered each Monday Night Football matchup. She was a multi-sport athlete at Niceville High School in Niceville, FL and became a college All-American in both the 400-meter and mile relay at Florida A&M University.

While attending the University of Florida, Fred Ridley played for the men’s golf team and was an alternate the year the Gators won the NCAA national tournament in 1973. In 1975, Ridley won the U.S. Amateur, the preeminent amateur golf tournament in the United States, where he defeated Keith Fergus in the 36-hole final, having beaten Curtis Strange and Andy Bean in previous rounds of the match-play championship. At the end of 1975, Ridley was ranked the #2 amateur in the country by Golf Digest.

In 1976 he won the Monroe Invitational, competed in the 1976 British Open and was a member of the 1976 Eisenhower Trophy team. Late in the year he was ranked the #10 amateur in the country by Golf Digest. Ridley never turned professional and remains the last U.S. Amateur champion to have never become a professional golfer.

In 2004, Ridley was elected president of the United States Golf Association (USGA). He has also served as co-chairman of the International Golf Federation. On August 23, 2017, Augusta National announced that Ridley would succeed Billy Payne as chairman of the club.

Florida State has produced many great wide receivers and Barry Smith’s career puts him with the best of them. From 1970-72, Smith snatched the football for the Seminoles with remarkable precision. As a senior in 1972, Smith caught 69 passes for 1,243 yards and 13 touchdowns. He caught 11 passes against Kansas and 10 against Virginia Tech and Florida, and was named first team All-American on squads selected by several groups including the annual Football Coaches team. Smith would finish his FSU career second in virtually every receiving category with 2,535 yards on 127 receptions and 27 touchdowns.

He was a a first round draft pick (21 overall) of the Green Bay Packers (1973). Smith went on to play for three seasons (42 games) with the Packers and one season with the Tampa Bay Buccaneers. Smith retired from the NFL in 1976 and has remained a loyal supporter of FSU athletics. The office complex housing the FSU softball and soccer offices is named after him and his wife.

Lisa Wagner is one of the best women bowlers in the country.  By the 2000 season, Lisa Wagner was the all-time women’s professional tournament titlist with 32 wins. Wagner was the 1996 USBC Queens Tournament champion. She also won five USBC Women’s Championships titles: an Open Division all-events title in 1988, Open Division doubles titles in 1982 and 1992, and Classic Division singles and doubles titles in 2001. Wagner was named Woman Bowler of the Year four times by the Bowling Writers Association of America. Wagner also was named 1980s Bowler of the Decade by both Woman Bowler magazine and Bowling Magazine. In 1996 she was inducted into the Women’s Professional Bowling Hall of Fame. At the start of her pro career, Wagner was named 1980 Rookie of the Year by the Ladies Professional Bowlers Tour. Among her professional titles were the 1983 Greater Milwaukee Open, the 1988 U.S. Open and the 1999 PWBA Storm Challenge.

Celebrating its 61st year, The Florida Sports Hall of Fame was started by the Florida Sports Writers and Sportscasters Association to recognize and honor Florida’s greatest sports figures and events and leverage this collective celebrity to promote fitness awareness, education and sports activities among our state’s youth and adults. Equally important is the promotion of the qualities of discipline and honor among sports participants.