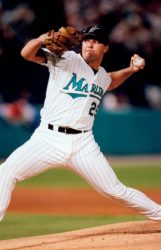 During a major league career that spanned 19 years, Al Leiter won 162 games. Al spent three years with the Florida Marlins including the 1997 season, where he won 11 games and helped lead the Marlins to a World Championship. On May 11, 1996, he pitched a no-hitter against the Colorado Rockies, the first no-hitter in Marlins franchise history. During his career, he won 10 or more games 10 times, played in three World Series, and was named to two All-Star teams while posting a career 3.80 ERA