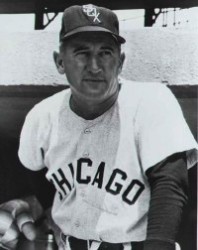 Al Lopez was a catcher and a manager in Major League Baseball (MLB) and a 1977 Inductee into the Baseball Hall of Fame. He established a major league record for career games as a catcher. Lopez later became the only manager to disrupt the Yankees American League pennant stretch from 1949-1964.

With a .584 career winning percentage, he ranks 4th in major league history among managers of at least 2000 games. Over the course of 15 full seasons as manager, he never had a losing record.

He was a native of Tampa, FL and a two-time MLB All-Star.