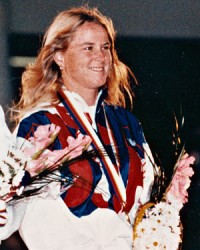 With a list of sailing accolades dating back for decades, including an Olympic Gold Medal, Allison Jolly is one of the sports great career success stories. She is currently in her 13th season as head coach of the University of South Florida sailing team.

The highlight of her sailing career occurred when the International Olympic Committee announced the first-ever women’s sailing event for the 1988 Olympics. Encouraged by family and friends to campaign for the team, success came in the form of a Gold Medal in Korea with her partner in the 470 class sailboat.

Allison, who was hired to be the USF sailing coach in August of 2004, currently lives in St. Petersburg with her family.