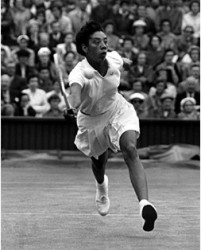 Althea Gibson (August 25, 1927 – September 28, 2003) was a World No. 1 American sportswoman who became the first African-American woman to be a competitor on the world tennis tour and the first to win a Grand Slam title in 1956. She is referred to as “the Jackie Robinson of tennis” for breaking the “color barrier.“

Althea Gibson became a tennis sensation in the 1950s. Her 1956 triumph at the French Tennis Championships (later known as the French Open) made her the first African-American woman ever to win a major singles title. The next year she won singles titles at both Wimbledon and the U.S. Championships, and repeated the feat in 1958.

Gibson retired as an amateur after the 1958 season, having become an acclaimed public figure. She later toured as a celebrity with the Harlem Globetrotters and then (like Babe Zaharias) chose golf as a second career; she played on the LPGA tour from 1964-71, where she once again became the first African-American to compete. Gibson was inducted into the Tennis Hall of Fame in 1971.