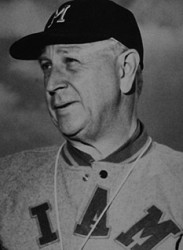 Andy Gustafson was born is Aurora, IL. He went to the University of Pittsburgh as a halfback. Gustafson scored the first touchdown ever in Pitt Stadium, against Washington & Lee.

Andy served as the head football coach of Virginia Tech from 1926 to 1929, where he compiled a 22-13-1 record. From there he went to the University of Miami. At Miami, Gustafson enjoyed his greatest coaching experiences, leading the Hurricanes to four bowl appearances, and shocking upsets over some of the nation’s best teams. Gustafson is considered one of the University of Miami’s most successful coaches, with a record of 93-65-3 (.587). He was the longest serving coach in school history. . He also served as the athletic director of the school, following his retirement as a head coach. He is currently a member of the University of Miami Sports Hall of Fame.