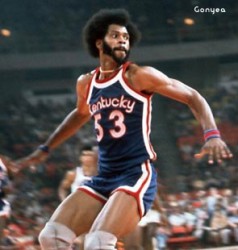 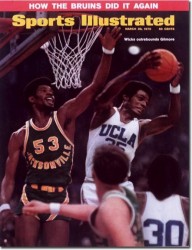 A star center during his two collegiate years at Jacksonville University, in Jacksonville, FL, Gilmore led the Dolphins to the NCAA Division I championship game in 1970, where his team was beaten 80-69 by the UCLA Bruins. Gilmore remains the top player in rebounds per game in the history of NCAA Division I basketball. 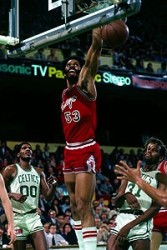 Gilmore followed five All-Star seasons with the Kentucky Colonels of the ABA by becoming the first overall pick of the 1976 NBA dispersal draft, which was held after the ABA was disbanded, as four teams transferred to the NBA. In Gilmore’s complete pro basketball career, he was an eleven-time All-Star, the ABA Rookie of the Year, and an ABA MVP, and he remains the NBA career leader for field goal percentage. Nicknamed “The A-Train,” the 7′ 2″ (2.18 m) Gilmore once played in 670 consecutive games.