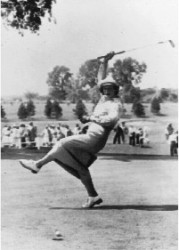 Mildred Ella (“Babe”) Didrikson Zaharias claimed to have acquired the nickname “Babe” (after Babe Ruth) upon hitting five home runs in a childhood baseball game, but most say it was from being called “Baby” as a toddler.

In the 1932 AAU Championships, Babe won five outright titles and tied for a sixth. In the process, she set five world records in a single afternoon. Didrikson’s performances were enough to win the team championship, despite her being the only member of her team. She competed in the 1932 Summer Olympics in Los Angeles where she won gold medals in the javelin (143 feet, 4 inches) and hurdles (11.7 seconds). The judges, however, disallowed her jumping style in the high jump (jumping over headfirst) in the final tie-breaker jump, and declared Jean Shiley the Olympic champion. After the Games, Shiley and Didrikson split their gold and silver medals.

By 1935, Babe began to play golf. She was denied amateur status in 1938 so she competed in the Los Angeles Open, a men’s PGA tournament, a feat no other woman would even try until Annika Sörenstam, Suzy Whaley, and Michelle Wie almost 6 decades later. She shot an 81 and 84 and missed the cut. After gaining back amateur status in 1942, she won the 1946-47 United States Women’s Amateur Golf Championships, as well as the 1947 British Ladies Amateur Golf Championship – the first American to do so – and 3 Western Open victories. She dominated the Women’s Professional Golf Association and later the LPGA, of which she was a founding member. She won the 1947 Titleholders Championship and the 1948 U.S. Women’s Open for her 4th and 5th major championships. She won 17 straight women’s amateur victories, a feat never equaled by anyone, including Tiger Woods. By 1950, Zaharias had won every golf title available. Totaling both her amateur and professional victories, Babe won a total of 82 golf tournaments.

In 1945, Zaharias played in 3 PGA tournaments. She shot 76-81 to make the 2-day cut at the Los Angeles Open, making her the1st (and currently only) woman in history to make the cut in a men’s PGA tour event. She continued her cut streak at the Phoenix Open and the Tucson Open, where she finished in 33rd and 42nd place respectively. Unlike other female golfers competing in men’s events, she got into the Phoenix and Tucson Opens through 36-hole qualifiers, as opposed to a sponsor’s exemption. Zaharias had her greatest year in 1950 when she completed the Grand Slam of the 3 women’s majors of the day, the U.S. Open, the Titleholders Championship, and the Western Open, in addition to leading the money list. That year, she became the fastest LPGA golfer to ever reach 10 wins, doing so in 1 year and 20 days, a record still standing. She was the leading money-winner again in 1951, and in 1952 took another major with a Titleholders victory. Babe became the fastest player to reach 20 wins (two years and four months). She also served as the president of the LPGA from 1952 to 1955.

Babe Didrickson Zaharias was diagnosed with colon cancer in 1953. Originally she made a comeback on the golf tour, but in 1955 her illness began to limit her golf abilities. The cancer was a fatal one and Babe Zaharias died at age 45. She was inducted into the Hall of Fame of Women’s Golf in 1951. In 1957, she was given the Bob Jones Award, the highest honor given by the United States Golf Association in recognition of distinguished sportsmanship in golf. She was 1 of 6 initial inductees into the LPGA Hall of Fame. The Associated Press voted Zaharias the Woman Athlete of the 20th Century in 1999. In 2000, Sports Illustrated magazine also named her 2nd on its list of the Greatest Female Athletes of All Time, behind the heptathlete Jackie Joyner-Kersee. She is also in the World Golf Hall of Fame. Zaharias is the highest ranked woman, at #10, on ESPN’s list of the 50 top athletes of the 20th century. In 2000, she was ranked as the 17th greatest golfer, and the 2nd-greatest woman player by Golf Digest magazine.