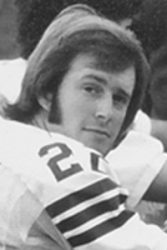 Barry Smith was born and raised in Miami and was a standout, two‑sport athlete (football and track) at Miami Coral Park HS. He was All-State and honorable mention All-American at wide receiver and a state champion high hurdler. To this day, he is among the 100 top all-time HS football players in Dade County. At FSU, he was a two-sport athlete – running on the record-breaking High Hurdles Shuttle Relay team as well as a 1st Team All-American Wide Receiver, and NCAA leader in TD receptions and reception yards. He broke all FSU season and career scoring records and held the record for most TD catches of any receiver in the state until 1987.

Drafted in the first round by the Green Bay Packers (1973) he went on to be NFC Rookie of the Year finalist and Green Bay Packer Man of the Year in 1975. In 1976, he joined the Tampa Bay Buccaneers for the franchise’s inaugural season. He was traded to his hometown Miami Dolphins the next year, however the return to Miami was cut short as Smith contracted polio during preseason camp. He was inducted into the FSU Athletic Hall of Fame in 1979 and made the College Football Hall of Fame ballot in 2021.