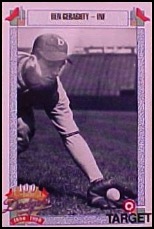 Benjamin Raymond Geraghty (July 19, 1912 – June 18, 1963) was an infielder in Major League Baseball and one of the most successful and respected minor league managers of the 1950s. He was twice honored as Minor League manager of the year.

In his 17-year managing career, Geraghty won 1,317 games and lost 1,021 (.563). Geraghty won five championships within a span of seven years for the Milwaukee Braves Single-A and Triple-A minor league affiliates. He won his final championship in 1962 with the Jacksonville Suns of the International League.

Geraghty managed the Jacksonville Braves, an integrated team in the Jim Crow South, where he handled racial adversity and confronted rigid racial segregation. Baseball great Hank Aaron played for Geraghty in 1953, and believed that Geraghty was the greatest manager ever to have lived.