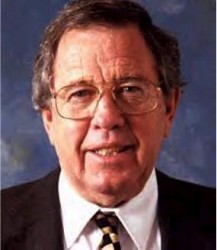 William Clifton France (April 4, 1933 – June 4, 2007), nicknamed “Bill Jr.” and “Little Bill,” was an American Motorsports executive who served from 1972 to 2000 as the head of NASCAR, the sanctioning body of United States-based stock car racing. He succeeded the founder of NASCAR, his father Bill France, Sr., as its head. France, Jr. was born in Washington, D.C., but his family moved to Daytona Beach, FL in 1935 to escape the Great Depression. He attended Seabreeze High School before attending the University of Florida. He served for two years in the United States Navy before turning to a career in racing. After serving as its vice-president for six years, France, Jr. became the head of NASCAR when his father Bill France, Sr. retired on January 10, 1972. The International Motorsports Hall of Fame describes the transition: “Other than the founding of NASCAR itself, Bill Jr.’s appointment to leadership is probably the most significant event in the history of the sanctioning body.” NASCAR went from a Southern regional sport to a national sport during his tenure.He continued his father’s legacy by fostering growth of the Daytona 500 stock car race and Daytona 200 motorcycle race at Daytona International Speedway. France turned the presidency of NASCAR over to Mike Helton in 2000 after being diagnosed with cancer. He made his son Brian France the CEO and chairman of NASCAR in 2003. Bill France, Jr. remained a member of the six person NASCAR board of directors.