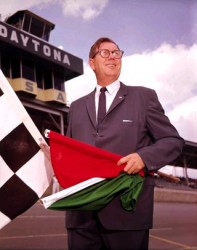 France formed NASCAR in 1948. He then proposed a new superspeedway called Daytona Internation Speedway. France began building a new 2.5 mile superspeedway in 1956 to host what would become the new premiere event of the series – the Daytona 500. The event debuted in 1959, and has been the premiere event since. He later built the Talladega Speedway which opened in 1969.

He served as Chairman and CEO of NASCAR. R.J. Reynolds Tobacco Company became the title sponsor in 1970, a move that changed the name of the series from “Grand National” to “Winston Cup”. Reynolds convinced France to drop all dirt tracks and races under 100 miles from the NASCAR schedule in 1972, a move that defined the “modern era” of the sport. Big Bill then turned the reigns of NASCAR over to his son Bill France, Jr. France kept an office at the headquarters until the late 1980s.

He built the International Motorsports Hall of Fame, which inducted France in its first class on July 25, 1990.