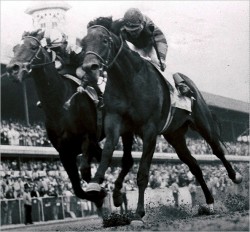 Bill Hartack was a Hall of Fame horse jockey. He and Eddie Arcaro are the only two jockeys to win the Kentucky Derby five times. Hartack also won the Preakness Stakes three times and the Belmont Stakes once.

He was inducted into the National Museum of Racing and Hall of Fame in 1959 at the early age of 27.