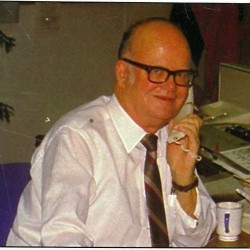 Bill McGrotha began his career in the May of 1953 with the Orange Bowl featuring the FSU Seminoles vs. the Miami Hurricanes. For the next 40 years, McGrotha was considered the undisputed lead writer Florida State University sports. Working closely with FSU football coach, Tom Nugent, McGrotha covered memorable events such as: the 3-3 tie vs. Florida in 1961; the three-tie season in 1962; the bald-headed Seven Magnificents; the 1964 victory over formerly unbeaten Kentucky; the first win vs. Florida in 1964; and the controversial “non-catch” by Lane Fenne in 1966. Due to his success at sports writing which was characterized by his positive attitude and love for sports, McGrotha won Associated Press national awards in 1980 for features and again in 1984 for columns. In 1997, FSU named the football press area in his honor after his service to them. At his death in 1993, McGrotha’s career was more than extraordinary, including more than 8,000 articles which covered six coaches and 11 governors. He served as the president of the Florida Sportswriter Association and shared his memoirs in his book, “Seminoles! The First Forty Years.”