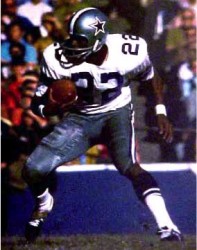 Robert Lee Hayes, also known as Bullet Bob, was an Olympic sprinter turned wide receiver in the NFL. He was a two-sport standout in college in both track and football at Florida A&M University. Hayes was enshrined in the Dallas Cowboys Ring of Honor in 2001 and was selected for induction in the Pro Football Hall of Fame in 2009.