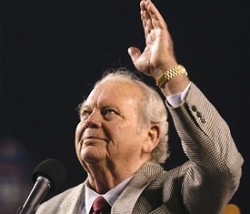 Robert Allan Murphy was born on September 19, 1924 in Oklahoma. Remembered as an American sportscaster for Major League Baseball, Murphy began his career in broadcasting with the minor league Muskogee, Oklahoma Reds. His first major league job came in 1954 with the Boston Red Socks; this job jumpstarted a 50-year career of play-by-play broadcasting for both television and radio. After his stint with the Red Socks, Murphy moved to the Baltimore Orioles for two seasons before landing his job with the Mets at their inception in 1962. Known for his positivity in calling games, Bob Murphy is best known for being the voice of the Mets. He remained with the team until his retirement in 2003 when he moved to Florida. One year later, Murphy passed away from his battle with lung cancer. In 1994, he was inducted into the Baseball Hall of Fame as a recipient of the Ford C. Frick Award for his broadcasting contributions to the game. During his career, Murphy occupied the broadcasting booth in every National League stadium.