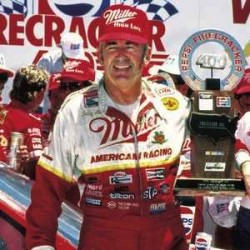 Robert “Bobby” Arthur Allison (born in Miami, FL) is a former NASCAR Winston Cup driver and was named one of NASCAR’s 50 greatest drivers. Bobby moved to the Grand National circuit in 1965 and got his first victory at Oxford Plains Speedway on July 12, 1966.

During the course of his career, Bobby Allison accumulated 84 victories, making him third all-time, tied with Darrell Waltrip, including three victories at the Daytona 500 in 1978, 1982 and 1988, where he finished one-two with his son, Davey Allison. He was also the NASCAR Winston Cup Champion in 1983 driving for DiGard Racing. Additionally, Allison ran in the Indianapolis 500 twice, with a best finish of 25th in 1975.

Bobby nearly died in a crash at Pocono Raceway in 1988 and was left with injuries that forced his retirement from driving in NASCAR. In 1992, his youngest son, Clifford Allison, was fatally injured in a practice crash for the NASCAR Busch Series race (now Xfinity Series) at Michigan International Speedway. Allison was elected to the International Motorsports Hall of Fame in 1993, the same year that his son Davey died following a helicopter accident at Talladega Superspeedway. He was inducted into the Motorsports Hall of Fame of America in 1992.

Allison is one of eight drivers to have won what was then considered a career Grand Slam (an unofficial term) by winning the sport’s four majors: the Daytona 500, Winston 500, Coca-Cola 600, and the Southern 500.