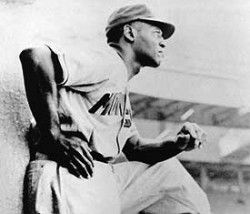 John Jordan “Buck” O’Neil was born on November 13, 1911 in Carrabelle, FL. O’Neil attended Edward Waters College in Jacksonville before turning semi-professional in baseball and eventually signing with the Memphis Red Sox for their first year of play in1937 with the newly formed Negro American League. The following season, O’Neil signed with the Kansas City Monarchs. There, he served as the first baseman for the team.

Buck’s playing career was briefly interrupted by a stint in the U.S. Navy from 1943-1945 during World War II. When he returned, he was named manager of the Monarchs but continued to play as a regular through 1951.

Over the course of his playing career, O’Neil had the honor of playing in four East-West All-Star games. He managed the Monarchs for 8 seasons, during which he won two Negro League World Series titles and sharing one when no playoff was held. After the 1955 season, he took on the position as scout for the Chicago Cubs, which eventually led to him being named MLB’s first African American coach in 1962.

O’Neal remained with the Cubs for many years before moving to the Kansas City Royals as a scout in 1988. While with the Royals, O’Neil was named the Midwest Scout of the Year in 1998. After his retirement from baseball, he became a popular and renowned speaker, leading efforts to establish the Negro League Baseball Museum in Kansas City, Missouri.

Before his death on October 6, 2006, O’Neil received an honorary doctorate in education from Missouri Western State University and served as a member of the Baseball Hall of Fame Veterans Committee from 1981-2000. Posthumously, he was awarded the Presidential Medal of Freedom and had a Lifetime Achievement Award named after him in 2007. The Royals chose to honor his hard work and dedication to the team by installing the Buck O’Neil Legacy Seat in Kauffman Stadium.