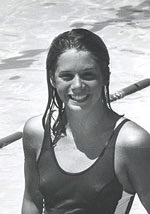 Catherine Northcutt “Catie” Ball Condon was born in Jacksonville, FL on September 30, 1951. Catie swam for the J.E.T.S. swim team in AAU competition as a teenager. At the Mexico City Olympic Games, Ball was the world record holder in all four distances of the breaststroke, but she arrived at the Olympics with a case of influenza. She was too ill to swim in the qualifying heats of the 200-meter breaststroke event, and finished fifth in the 100-meter breaststroke. Ball won her only gold medal in the 400-meter medley relay, swimming the breaststroke leg of the four-person relay.

Ball was the 1967 nominee for the Sullivan Award for the state of Florida and was inducted into the Swimming Hall of Fame in 1976 as an honor swimmer.