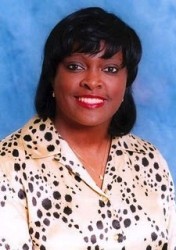 Chandra Cheeseborough’s life has been a collection of very fast, very significant footsteps. As a young girl she outran every boy in the neighborhood. As a teenager her feet carried her into the track and field spotlight, where she set American records, won Olympic gold medals and international acclaim.

She kept striding forward and became women’s track and field coach at her alma mater, Tennessee State University, taking over the Tigerbelles program for the legendary Ed Temple. Cheeseborough served as an assistant track coach for the 2008 U.S. Olympic team and is a member of the USA Track and Field Hall of Fame.

As an athlete, Cheeseborough was named to three United States Olympic teams. She placed third as a 17-year old in the 100-meter dash in Montreal. She qualified for the ill-fated 1980 Olympic team that did not compete because of a boycott. In 1984, at the Los Angeles games, she made Olympic history by running a leg on two Gold Medal Relay Teams and was the silver medalist in the 400-meters.

Coach Cheeseborough led the TSU track program to a pair of consecutive Ohio Valley Conference Outdoor Track Championships and is the reigning OVC Indoor champion as well. She is a four-time OVC Coach of the Year

A native of Jacksonville, FL, she is a graduate of both Ribault High School and Tennessee State University, earning a B.S. degree in Health and Physical Education.