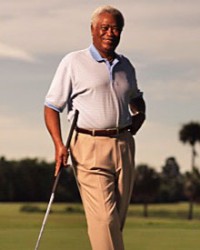 Charles Owens was born on February 22, 1930 in Winter Haven, FL. Attending Florida A&M, he played football for 2 years before leaving to serve in the U.S. Army. During a parachute jump at Fort Bragg, North Carolina, Owens suffered serious injuries to both his knees and left ankle which left him paralyzed.

After his accident, he looked to golf, turning professional in 1967 and joining the PGA Tour in 1970. In his seven years with the Tour, Owens’s major wins were the 1971 Kemper Asheville Open and the 1974 Florida Open. Due to his disabilities, he always played with a limp and took all golf-shots cross-handed. He was given special permission to use a gold cart at the 1987 U.S. Senior Open after leading a protest against the USGA for its ban on carts at the event. His major wins during his career with the Senior PGA Tour were the 1986 Treasure Coast Classic and the 1986 Del. E. Webb Senior PGA Tour Roundup.

He was awarded the Ben Hogan Award in 1987, as well as being inducted in the African American Golfers Hall of Fame in 2007. After his retirement from professional golf in 1991, Owens moved to Tampa, FL.