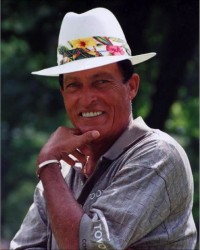 Juan Antonio “Chi-Chi” Rodriguez was born in Puerto Rico. In 1954, Rodriguez joined the Army when he was 19. With an interest in golf since he was a child, he maintained a relationship with the sport during his stint in the Army. He decided to turn pro in 1960. In total, he won eight titles on the PGA Tour, including the Denver Open. He also represented his country of Puerto Rico on 12 World Cup teams. Rodriguez’s success led him to winning the 1986 Hispanic Recognition Award and being named the 1988 Replica’s Hispanic Man of the Year. Rodriguez became eligible to play on the Senior PGA Tour (now known as the Champions Tour) in 1985 and did so for many years with great success, accumulating 22 tournament victories between 1986 and 1993. He was the first player on the Senior PGA Tour to win the same event in three consecutive years. He set a tour record with eight consecutive birdies en route to a win at the 1987 Silver Pages Classic. In 1989, he was voted the Bob Jones Award, the highest honor given by the United States Golf Association in recognition of distinguished sportsmanship in golf. Rodriguez received the 1989 Old Tom Morris Award from the Golf Course Superintendents Association of America, GCSAA’s highest honor. In 1992, he was inducted into the World Golf Hall of Fame, the first Puerto Rican so honored. Rodriguez established the “Chi-Chi Rodriguez Youth Foundation”, an afterschool program at the Glen Oaks Golf Course in Clearwater, FL.