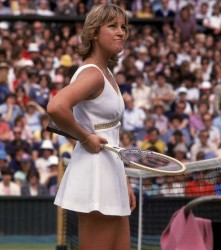 Evert’s career win–loss record in singles matches of 1,309–146 (.900) is the best of any professional player in tennis history. In tennis writer Steve Flink’s book The Greatest Tennis Matches of the Twentieth Century, he named Evert as the third best female player of the 20th century, after Steffi Graff and Martina Navratilova.