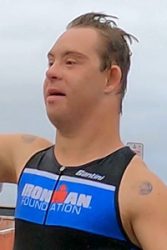 Chris joined Special Olympics Florida when he was only nine – starting with golf, then adding swimming, track & field, basketball and, after Special Olympics Florida introduced the sport in 2019, triathlon. Working with his coach and father, over 2½ years he transformed himself from a couch potato to an athlete doing 100-mile bike rides and 18-mile runs. He began swimming nearly three miles at a stretch, lifting weights and doing mental exercises to learn to push past pain. In November 2020, Chris became the first person with Down syndrome to complete a full IRONMAN, making Chris a Guinness World Record holder. In the months after, Chris won an ESPY and the Laureus Sporting Moment of the Year Award. He ran both the Boston and New York City marathons, wrote and published a book, and became a sought-after motivational speaker. He most recently completed the 2022 IRONMAN Championships in Kona, Hawaii.