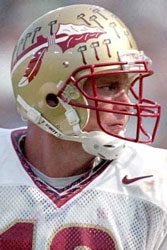 Chris Weinke became the second player from Florida State University and fifth player from a Florida school to win the coveted Heisman Trophy when he captured that award as a senior in 2000. During that season, he passed for 4,100 yards and 33 touchdowns. He also led the Seminoles to a national championship in 1999 and finished his career with 79 career touchdown passes in three seasons as a starter. In his three years as starting quarterback for the Seminoles, Chris compiled a record of 32-3. Weinke would play seven seasons in the National Football League and is currently quarterbacks coach at the University of Tennessee.