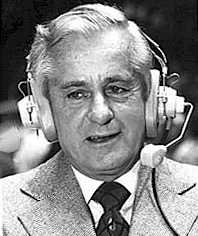 Curtis Gowdy was a prolific sports broadcaster for over 40 years. Known as the “Cowboy at the Mike”, Gowdy’s career consisted of 5 decades and 3 broadcast networks. He called hundreds of football, basketball, baseball, Olympic, and outdoorsman events and is today is one of the most heralded broadcasters of all time. Gowdy was born in Green River, WY and his cowboy roots stayed with him in every event that he broadcasted. He was known for his down-home way of presenting things and a warmth, love, and affection for his audience. Gowdy was a gifted basketball and tennis player at the University of Wyoming; however, he suffered a spinal injury in World War II that forced him away from the game and into the broadcast booth. The manager of KFBC radio in Cheyenne asked Gowdy if he was interested in calling a six-man–football game, soon the young Gowdy was ready. It was a small crowd without a roster, jersey numbers, or yard or goal lines but it was quite possibly the height of Gowdy’s creativeness as he made up things as it went along. From there he moved on to Oklahoma Sooners football for 3 years before moving on to calling New York Yankees baseball along Mel Allen. After two years in New York, Gowdy switched over to the Boston Red Sox, and had a 15 year run as the radio and TV play-by-play announcer. Gowdy was the voice of college football when it premiered on ABC in the early 1960s and also used his talents with the American Football League, eventually calling 9 Super Bowls, including the 1st in 1967. In 1966, he voiced the NBC Baseball Game of the Week for the first time, eventually calling 16 World Series and 16 baseball All-Star games. Among Gowdy’s other broadcasting stats are 12 Rose Bowls, 8 Olympic Games, 24 NCAA Final Fours, Ted Williams’ last at-bat in 1969, the “Immaculate Reception” in 1972, and Hank Aaron’s 715th home run in 1974. The most personal side of Gowdy’s career came during his 20 seasons as host of The American Sportsman. He was able to be his inner cowboy as he hunted and fished the world with some of his friends. Most importantly, Curt Gowdy put his family first. He always made time for his wife and three children. Gowdy earned 13 Emmys over the course of his career, including 6 for The American Sportsman. He was presented the Lifetime Achievement Emmy Award in 1991 and is the 1st individual sports figure to win the Peabody Award for Outstanding Journalistic Achievement.