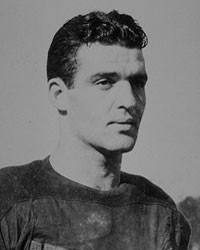 Dale Van Sickel grew up in Gainesville, FL and attended Gainesville High School. In 1928, Dale became the University of Florida’s first football All-American as a two-way offensive and defensive standout. Van Sickel was noted as one of college football’s premier pass receivers as he played on the nation’s highest scoring team (336 points in nine games). In 1975, Dale became the first Florida Gator inducted into the College Football Hall of Fame. An all-around athlete, he also lettered in varsity basketball and baseball for the Gators.

The late Van Sickel went on to become one of Hollywood’s top stunt men for nearly five decades and was twice president of the Motion Picture Stunt Men’s Association. Dale passed away as a result of complications from injuries in 1977 at the age of 69.