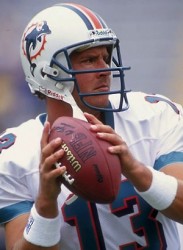 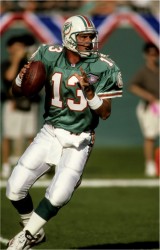 Dan Marino is a Hall of Fame quarterback that attended the University of Pittsburgh and played his entire National Football League (NFL) career for the Miami Dolphins. Despite never winning the Super Bowl, Dan is one of the most prolific quarterbacks in the history of the NFL and holds or has held almost every major passing record.

Marino was selected to play in nine Pro Bowls and was named first or second-team All-Pro eight times and earned All-AFC honors six times. The Dolphins have retired his number and he is in their Honor Roll. They erected a statue of him outside of the Dolphins’ Stadium and renamed the street Dan Marino Boulevard.

Marino is in the College Football Hall of Fame and was a first ballot selection for the NFL Hall of Fame.