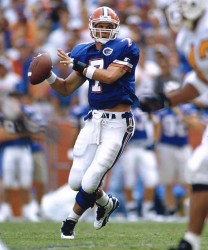 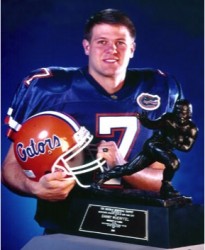 Danny Wuerffel was the University of Florida’s second Heisman Trophy winner (1996). He led the Gators to the national championship title in 1996 with an 11-1 record, defeating Florida State in the Sugar Bowl. In 1996, Wuerffel passed for 3,625 yards with a pass efficiency rating of 170.61. The Fort Walton Beach native threw for 39 touchdown passes for the season compared with only 13 interceptions.

Danny finished his career completing 708 of 1,170 passes for 10,875 yards (5th-best in major college history) with 114 TD passes, which is the best in SEC history and 2nd best in major college history. His career pass efficiency rating of 163.56 was the best at the time in major college history and his percentage of passes which went for a touchdown (9.74) ranked 1st in collegiate history. In 1995, his efficiency rating of 178.4 set a single-season collegiate record. In his Heisman-winning season of 1996, he completed 207 of 360 passes for 3,625 yards (SEC record) for 39 touchdowns (led the nation and tops in SEC history) and his efficiency rating of 170.6 made him the 1st quarterback to ever post a rating of 170 or better in back-to back years. Wuerrfel was a two-time recipient of the GTE Academic All-America of the Year Award for football and the 1996 recipient of the Draddy Trophy (presented annually to the nation’s premier scholar-athlete). Danny led the team in passing for four years on the way to leading the Gators to 4 conference titles and a national title.

Wuerffel was drafted in the 4th round of the 1997 NFL draft by the New Orleans Saints, and played for the Green Bay Packers, Chicago Bears and Washington Redskins before retiring in 2004.

In 1999, Wuerrfel was named to the Gainesville Sun’s UF Team of the Century and was inducted into the UF football Ring of Honor. Danny was also chosen as the century’s top Gator offensive player by that publication. He currently serves as Director of Development for the Desire Street Ministries in New Orleans.