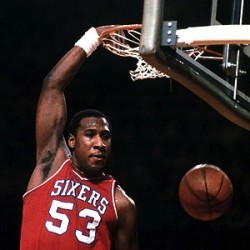 Darryl Dawkins (born Orlando, FL) is a retired professional basketball player, most noted for his days with the NBA’s Philadelphia 76ers and New Jersey Nets, although he also played briefly for the Detroit Pistons and Utah Jazz late in his career. He was nicknamed “Chocolate Thunder” for his powerful dunks.

Dawkins averaged double figures in scoring nine times in his 14 years in the NBA, often ranking among the league leaders in field-goal percentage. He also played in the NBA Finals three times as a member of the Philadelphia 76ers in the late 1970s and early 1980s. On the flip side, Dawkins set an NBA record for fouls in a season (386), and he never quite lived up to the expectations that had been heaped upon him when he was drafted out of high school.

In a game against the Kansas City Kings in November 1979, Dawkins threw down such a massive dunk that the backboard shattered into tiny shards. Three weeks later he did it again. A few days after that the NBA ruled that breaking a backboard was an offense that would result in a fine and suspension. Dawkins named the backboard-breaking dunk, “The Chocolate-Thunder-Flying, Robinzine-Crying, Teeth-Shaking, Glass-Breaking, Rump-Roasting, Bun-Toasting, Wham-Bam, Glass-Breaker-I-Am-Jam.” He named other dunks as well: the Rim Wrecker, the Go-Rilla, the Look Out Below, the In-Your-Face Disgrace, the Cover Your Head, the Yo-Mama, and the Spine-Chiller Supreme. The 76ers also kept a separate column on the stat sheet for Dawkins’s self-created nicknames: “Sir Slam,” “Dr. Dunkenstein” and “Chocolate Thunder.”