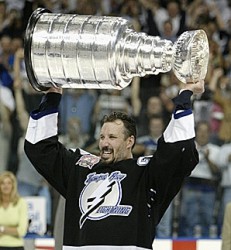 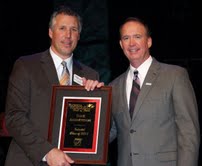 Dave Andreychuk entered the NHL as an 18-year old for Buffalo, close to his home in Hamilton that he could still pretty much live at home. He scored a goal in his first game, and in his first full season he scored 38 goals, establishing himself as a natural scorer.

During his first ten years with the Sabres, the team won only one of nine playoff series. Midway through the 1992-93 season he was involved in a major trade that sent him to the Toronto Maple Leafs with Daren Puppa and a draft choice for Grant Fuhr and a draft choice. The move rejuvenated his career, as he finished the season with 54 goals, one of the few times a player has hit the 50-mark during a year he was traded.

Andreychuk scored 53 the next year to break Frank Mahovlich’s team record for a left-winger, but again in Toronto he didn’t win a Cup and GM Cliff Fletcher sent him to New Jersey for two draft choices. He signed with Boston as a free agent but was traded to Colorado in the same deal that involved Ray Bourque, but still the Avs made it no farther than the semi-finals in the spring of 2000. 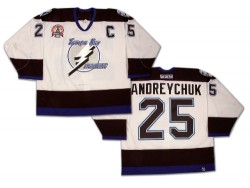 After a return stint with Buffalo in 2000-01, Andreychuk signed with the Tampa Bay Lightning. He is one of only four players to score 30 or more power-play goals in a season and is the second-highest scoring right-winger in league history, surpassing the 600 goal-mark in 2002-03 and the 1,300 point mark the following year while captaining the Tampa Bay Lightning to their first Stanley Cup title in franchise history and Andreychuk’s first of his illustrious 22-year career.

Following 42 games of the 2005-06 season the veteran forward was waived by the Tampa Bay Lightning on January 10, 2006 bringing an end to his long career.

Internationally, he has won a bronze medal with Canada at the 1983 World Juniors and three years later won another bronze at the World Championships.