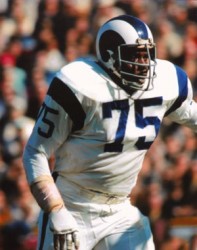 Deacon Jones, a Florida native, played 13 seasons in the NFL for the Los Angeles Rams, San Diego Chargers, and Washington Redskins. He is known as one of the most prolific pass rushers of all time as a defensive end. He recorded 173.5 sacks over his career. He was an eight-time pro bowl selection five-time all-pro first team, three-time second team, apart of the NFL 75th Anniversary All-Time Team, NFL 1960s All-Decade Team, two-time defensive player of the year, Rams rookie of the year, and his number has been retired by the St. Louis Rams. He was also inducted to the Pro Football Hall of Fame in 1980.