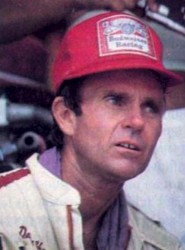 Dean Chenoweth drove Unlimited hydroplanes from 1968 until his death in 1982. Known primarily for his championship exploits with Bernie Little’s Miss Budweiser team, Chenoweth won 25 Unlimited races. He captured the Crown Jewel of APBA competition, the Gold Cup, four times in 1970, 1973, 1980, and 1981. He also won four National High Point Championships and, in 1980, set a world lap speed record of 138.249 MPH on the Columbia River at Tri-Cities, WA. Dean established a never-to-be equaled record of 20 consecutive heat victories at the first 5 races of 1980, driving the famed Rolls Royce Griffon-powered Miss Budweiser.

Dean had one of his best seasons in 1973. His chief rival was Pay ‘n Pak, piloted by Mickey Remund. Chenoweth’s boat was three years older and a thousand pounds heavier than Pay ‘n Pak, but Dean was nevertheless able to achieve parity with the Pak. This was due to Chenoweth consistently securing the inside lane in heat confrontations.

Dean Chenoweth’s finest racing hour occurred on a cold, rainy, day on Seattle’s Lake Washington in 1973. Visibility was terrible but water conditions were ideal. During the first heat of the World Championship, Miss Budweiser and Pay ‘n Pak shared the same roostertail for five laps on a 3 mile course to become the first boats to average better than 120 MPH in heat competition. Miss Budweiser and Chenoweth did 122.504, while Pay ‘n Pak and Remund checked in at 120.697. The raw power and the competitive finesse of the two boats were positively awesome. This was what hydroplane racing was all about.

Despite being retired from the sport between 1974 and 1979, Chenoweth proved himself to be as competitive as ever in his later years. Even in the last year of his life, Dean was nothing short of sensational. At season’s end in 1981, Chenoweth had won six of eight races, including the Gold Cup in Seattle and the World Cup in Acapulco, Mexico.

Chenoweth was killed in a racing accident in a “classic blow-over” during a race in Washington. He was travelling in excess of 175 mph when his boat flipped over and crushed him at the age of 44.