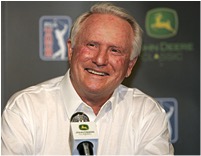 Deane R. Beman (born April 22, 1938) was a professional golfer, golf administrator, and golf course designer. During his career, he won the U.S. Amateur twice and the British Amateur once. He also lost a playoff to Gary Cowan for the 1966 U.S. Amateur. Beman turned professional in 1967 and won four times on the PGA Tour between 1969 and 1973. Deane was also the second commissioner of the PGA Tour, serving from 1974 to 1994. He introduced The Players Championship concept during this time. He was inducted into the World Golf Hall of Fame in 2000 and was awarded the seventh PGA Tour Lifetime Achievement Award in 2007. Following his stint as PGA Commissioner, Beman began designing golf courses.