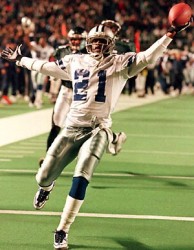 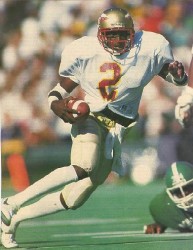 Deion Luwynn Sanders was born August 9, 1967 in Fort Meyers, FL. Deion was a National Football League (NFL) cornerback, Major League Baseball (MLB) outfielder, and is currently an NFL Network commentator. He carries the nicknames “Prime Time” and “Neon Deion”. Sanders is considered one of the most versatile athletes in history because he played two sports at multiple positions. 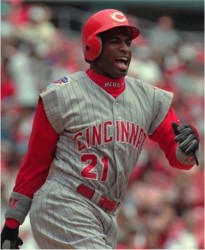 In the NFL he played primarily at cornerback, but also played as a wide receiver, kick returner and punt returner for the Atlanta Falcons, the San Francisco, the Dallas Cowboys, the Washington Redskins and the Baltimore Ravens, winning the Super Bowl with the 49ers and Cowboys. In Major League Baseball, he played for the New York Yankees, the Atlanta Braves, the Cincinnati Reds and the San Francisco Giants. Sanders played his college career at Florida State University, where he excelled at both football and baseball.