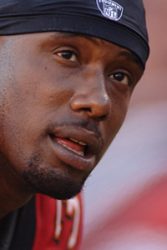 Jackson was drafted by the Tampa Bay Buccaneers in the fourth round of the 1999 NFL Draft and went on to grab two interceptions to help Tampa beat the Oakland Raiders in Super Bowl XXXVII. He was named the game’s MVP, becoming the first safety to win the award since 1973, and the third defensive back overall. Jackson attended Florida State University and was named All-ACC as a junior. He finished his college football career with 194 tackles, 7 interceptions, 16 passes defensed, one forced fumble, one fumble recovery, and blocked four field goals.