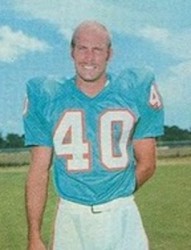 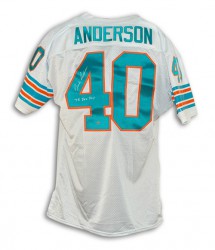 Richard “Dick” Anderson became the third Colorado Buffalo to be inducted into the College Football Hall of Fame, entering in 1993, reaching the perfect pinnacle for his football career. He was a consensus All-American in 1967, when he also earned all-Big Eight honors.

He had 266 tackles and 14 interceptions in his career, numbers at the time were the most in CU history when recorded (and still rank 18th and third, respectively). He was a member of CU’s All-Century team (1989), and has been inducted into the Big Eight Hall of Fame and the Colorado Sports Hall of Fame. He was a third round draft pick by the Miami Dolphins in the ’68 AFL-NFL Draft, and he went on to have a 10-year career with the Dolphins where he was a three-time all-pro performer and member of the undefeated ’72 Super Bowl champion team.

A successful businessman in the Miami area, Dick has also made a name for himself on the Celebrity Golf Tour. His son Blake also attended CU and played on the football team in the early 1990s.