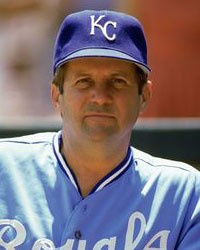 Dick Howser was born in Miami, FL and attended Florida State University. At Florida State, he received honors as an All-American shortstop twice and set a school record with a batting average of .422 in 1956.

Howser was signed by the Kansas City Athletics after college. In his first season, he hit .280, stole 37 bases, scored 108 runs, and led American League shortstops in putouts and errors in his rookie season. For this, he was selected to the 1961 All-Star team and named The Sporting News rookie of the year.

As a manager at the major league level, Howser was highly successful, never finishing lower than second place during his seven-year managerial career. In 1987, Howser’s number 10 became the first number retired by the Kansas City Royals. In that same year, the St. Petersburg Area Chamber of Commerce established the Dick Howser Trophy, which is college baseball’s equivalent of college football’s Heisman Trophy.

Florida State plays their games in Dick Howser Stadium and has a bronze statue of him in front of the stadium.