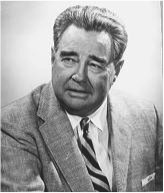 Richard D. Pope, Sr. can be credited for making the sport of water skiing as popular as it is today. His interest in the water sport came as a young man, performing with his brother on the aquaplane in South Florida. Pope’s first encounter with water skis came in the late 1920s. In fact, one of the 1st publicized pictures of a water skiing jump to hit the scene came during one of Pope’s performances at Miami Beach in 1928. Soon, many were interested in learning more about this unique form of entertainment.

During the Great Depression, Pope was forced to move to New York to work so that he might support his family. However, with the help of his wife, he returned to Florida in 1936 to follow his dream of opening a garden that would be known globally. Cypress Gardens became an instant tourist hit. After the park had opened, Pope left for a few years to serve in the Army during World War II. During this time, his wife who was managing the Gardens, began ski shows. Upon return, Pope was fascinated by the idea of fusing the gardens with his passion of water skiing. He hosted several major tournaments, which eventually led to the founding of the World Water Ski Federation. In addition to promoting and organizing ski competitions at a national and international level, Pope served as the president of the American Water Ski Association. He is a member of the Water Ski Hall of Fame.