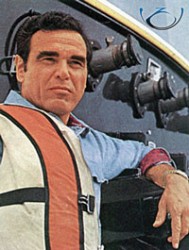 Don Aronow was a designer, builder and racer of the famous Cigarette, Donzi, and Formula speedboats. He built speedboats for His Imperial Majesty Shah of Iran, Charles Keating,, Malcolm Forbes, and George H.W. Bush. President Lyndon Johnson owned several Donzi speedboats with which he would race his Secret Service agents.

Having made his money in the construction business in the late 1950s, Aronow moved to Miami in 1961 where he began racing boats for a hobby. By the end of 1962 he had formed the Formula Marine boat company . In 1966, he founded Magnum Marine with Elton Cary and in 1970, after campaigning his boat “The Cigarette” around the world and winning the World Championship, he started Cigarette Racing Team using his own designs. He formed the USA Racing Team and built the Blue Thunders, 39-foot catamarans used by the United States Customs Service to patrol U.S. waters and run down illegal offshore activities, especially drug smuggling.

The great speed of Cigarette boats also made them a popular choice among cocaine runners. In 1987, Don was murdered in his car at the end of 188th Street in Miami where his boat companies operated. Two men — Ben Kramer, a suspected drug runner who bought Aronow’s USA Racing Team and was forced to sell it back to Aronow after the Customs Service refused to do business with him, and Bobby Young — eventually pleaded no contest to manslaughter related to Aronow’s murder.

Aronow’s boats won over 350 offshore races and he was a 2-time world champion and 3-time U.S. champion. He has been elected to every powerboating Hall of Fame in existence and he and Gar Wood were the only two Americans to have ever received the UIM Gold Medal of Honor.