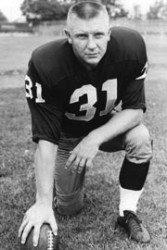 Donald John Bosseler (born January 24, 1936 in New York) is a former football fullback who played in the National Football League (NFL) for the Washington Redskins from 1957 to 1964. He played college football at the University of Miami and was drafted in the first round (ninth overall) of the 1957 NFL Draft.

He was inducted into the College Football Hall of Fame in 1990. Bosseler was a four-year starter at fullback for the University of Miami. In his senior year, 1956, he helped the team to an 8-1-1 record, was named All-America by the Associated Press, and was MVP in the Senior Bowl. He rushed for 1,642 yards in his four years.

Bosseler played seven seasons with the Redskins before retiring from football as a one-time Pro-Bowler.