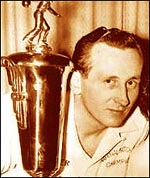 Don Carter (born July 29, 1926) was a right-handed professional bowler. Picking up the game while working a childhood job as a pinsetter, Carter went on to become one of the legends of 10-pin bowling and a founding member of the Professional Bowlers Association (PBA) in 1958. Carter served as the first president of the PBA. Don was 6-time bowler of the year (1953, ’54, ’57, ’58, ’60 and ’62). He was voted the Greatest Bowler of All-Time in a 1970 Bowling Magazine poll, and ranked 11th on the PBA’s 2008 list of “50 Greatest Players of the Last 50 Years.” After retiring, Don moved to Miami, FL. Carter is known for a number of bowling “firsts”: First bowler to win every possible major tournament in a career (All-Star, World Invitational, PBA National and ABC Masters), first bowler to have a professional tournament named after him, and first athlete to sign a $1 million endorsement contract, inking a multi-year deal with Ebonite International in 1964. He was inducted into the PBA Hall of Fame in 1975.