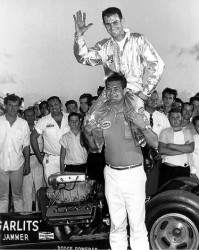 Donald Glenn “Don” Garlits (born January 14, 1932, Tampa, FL) is considered the father of drag racing. He is known as “Big Daddy” to drag racing fans around the world.

Along with T.C. Lemons, Garlits perfected the rear-engine “top fuel dragster design”. This design is notably safer as it puts most of the fuel processing and rotating or reciprocating parts of the dragster behind the driver. The driver is placed in “clear air” in front of nearly all mechanical components, thus remaining capable of activating a variety of safety equipment in the event of catastrophic mechanical failures or fire.