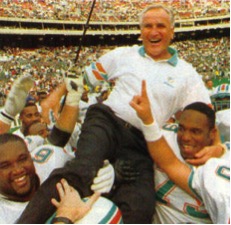 Donald Francis “Don” Shula is best known as coach of the Miami Dolphins, the team he led to 2 Super Bowl victories and to the National Football League’s only perfect season. Shula was named 1993 Sportsman of the Year by Sports Illustrated. He currently holds the NFL record for most career wins with 347.

In 1951, Shula signed with the Cleveland Browns. In 1953, he was traded to the Baltimore Colts where he played for four seasons before finishing his playing career with the Washington Redskins. In his 7 NFL seasons, Shula played in 73 games, intercepted 21 passes and also recovered four fumbles.

Shula was hired to coach the Baltimore Colts in 1963. His hiring was controversial because he was thought to be too young at only age 33. He was successful, compiling a 71–23–4 record in seven seasons with Baltimore, but he was just 2–3 in the postseason, including two losses in championship games in which the Colts were heavy favorites.

After the 1969 season, Joe Robbie, owner of the Miami Dolphins, signed Shula as Miami’s head coach. Shula’s Miami teams were known for great offensive lines, strong running games, solid quarterbacking, excellent receivers, and a defense that worked well as a cohesive unit. Shula changed his coaching strategy as his personnel changed. His Super Bowl teams in 1971-73 and 1982 were keyed by a run-first offensive strategy and a dominating defense. In 1983, shortly after losing Super Bowl XVII to the Washington Redskins, the Dolphins drafted quarterback Dan Marino and by 1984 the Dolphins were back in the Super Bowl. For all his success, the Dolphins’ 1974 Super Bowl win over the Minnesota Vikings proved to be Shula’s last championship. Despite consistent success in the regular season, Shula was unable to win in the post-season, failing in 12 trips to the playoffs—including two more Super Bowl appearances—before retiring after the 1995 season.

His retirement ended one of the greatest coaching legacies in NFL history. He set numerous records as a head coach. He is 1st in most games coached (526), most consecutive seasons coached (33), and Super Bowl Appearances—six, appearing once with the Baltimore Colts and five times with the Miami Dolphins. Shula had a 2-4 record in his six Super Bowl appearances.