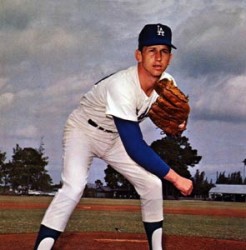 Don Sutton attended J.M. Tate High School in Cantonment/Gonzalez, FL where he played baseball, basketball, and football. He led his baseball team to the small-school state finals two years in row, winning his junior year, 1962, and losing 2-1 in his senior year. Don was named all-county, all-conference, and all-state for both of those seasons.

Sutton’s major league debut (with the Los Angeles Dodgers) was on April 14, 1966. In the majors, he played 23 years for the Dodgers, Houston Astros, Milwaukee Brewers, Oakland Athletics, and California Angels. He won a total of 324 games, 58 of them shutouts and five of them one-hitters, and he is seventh on baseball’s all-time strikeout list with 3,574. He also holds the major league record for number of consecutive losses to one team, having lost 13 straight games to the Chicago Cubs.

Sutton was a 4-time All-Star and also holds the dubious distinction of being the player with the most at-bats without a home run (1,354). When asked how close he ever came to hitting a home run, Don deadpanned, “A triple.”