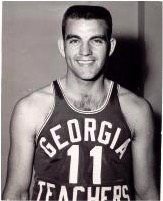 Don Wallen attended Georgia Southerm University and while there, earned eight varsity letters playing basketball and baseball in the mid 1950’s. As a shortstop, he hit .418 for the baseball team. As point guard for the basketball team, he set season assists record at 223 and career mark with 510. Don led the 1957 basketball squad in scoring with 15.5 points per game.

Wallen coached the Florida team in the first Georgia-Florida High School All-star basketball game in 1986 and was the first high school coach inducted into the Florida Sports Hall of Fame.