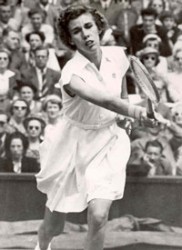 Doris Hart was born on June 2, 1925 in St. Louis, Missouri. She was a tennis champion in singles, women’s doubles, and mixed doubles. Hart’s first Grand Slam title was in women’s doubles at Wimbledon in 1947, when she was still a student at the University of Miami. Doris won another major singles title in 1949 at the Australian Championships. She also won singles titles at the French Championships in 1950 and 1952, Wimbledon in 1951, and the U.S. Championships in 1954 and 1955.

During her Wightman Cup career from 1946 through 1955, Hart was a perfect 14-0 in singles matches and 8–1 in doubles matches. She won 35 Grand Slam titles during her career, tying her for 5th on the all-time list. Six of her titles were in women’s singles, 14 in women’s doubles, and 15 in mixed doubles. Hart is one of three players, all women, to have a “boxed set” of Grand Slam titles—every possible title (singles, same-sex doubles, and mixed doubles) from all four Grand Slam events.

Hart retired from the tour in 1955 to become a tennis teaching professional and was inducted into the International Tennis Hall of Fame in 1969.