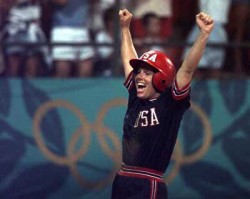 Dorothy “Dot” Richardson was born on September 22, 1961 in Orlando, FL. At the age of 13, she was the youngest player to ever play in a Women’s Major Fast Pitch National Championship.

Beginning in 1972, she played softball for the Union Pack Jets of Orlando, the Orlando Rebels, the Raybestos Brekettes of Connecticut, and the California Commotion. She was a key member of the United States National Softball squad during the sport’s Olympic debut in the 1996 Olympics. During the gold medal match, Richardson hit the home run that won the game.

Richardson is the recipient of the 1998 Sports Legends Award, the 1997 Babe Zaharias Award (Female Athlete of the Year), the 1996 Amateur Athletic Foundation Athlete of the Year, inducted into the UCLA Hall of Fame in 1996, Nuprin Comeback of the Year Award in 1990, and four-time Sullivan Award nominee. Her college honors while she played at UCAL include: NCAA Player of the Decade (1980s), three-time NCAA All-American, two-time AIAW All-American, three-time ULCA MVP and 1983 All University Award at UCLA. She was named MVP in the Women’s Major Fast Pitch National Championship four times. She is an inductee of the National Softball Hall of Fame.

In addition to all that she has accomplished in softball, Richardson also earned her M.D. in 1993 from the University of Louisville School of Medicine.