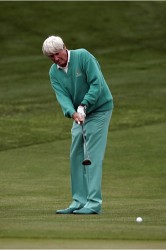 Doug Sanders (born July 24, 1933) is a former professional golfer who won 20 PGA Tour tournaments during his career. He is remembered for an exceptionally short, flat golf swing – a consequence, it appears, of a painful neck condition that radically restricted his movements.

He attended the University of Florida, where he played for the Gators’ golf team in National Collegiate Athletic Association (NCAA) competition from 1951 to 1955. As a senior in 1955, Sanders led the Gators golfers to a Southeastern Conference (SEC) championship and a 4th place finish at the NCAA championships. He was later inducted as a “Gator Great” member of the University of Florida Athletic Hall of Fame.

Sanders had 13 top-10 finishes in major championships, including 4 2nd place finishes: 1959 PGA Championship, 1961 U.S. Open, and 1966 and 1970 British Opens. In 1966, he became one of the few players in history to finish in the top-10 of all 4 major championships in a single season, despite winning none of them. He earned unfortunate notoriety for taking four shots from just 74 yards as the leader playing the final hole of the 1970 British Open at St. Andrews, missing a downhill 3-foot putt to win, before losing the resulting 18-hole playoff by just a single shot the next day to Jack Nicklaus.

Sanders was always known as a stylish, flamboyant dresser on the golf course, which earned him the nickname Peacock of the Fairways. In 1973, Esquire named Sanders one of America’s Ten Best Dressed Jocks.